FROM DREAM TO FIRST STEPS

During a sleepless night, in early spring of 2006 Mr. Mihály Vlaszák, managing director of Metalloglobus Metal Casting and Trading Ltd., was thinking about achieving spectacular performance related to the company's activity, which, on the one hand strengthens the reputation of the company as well as an unforgettable experience for the people involved in it. 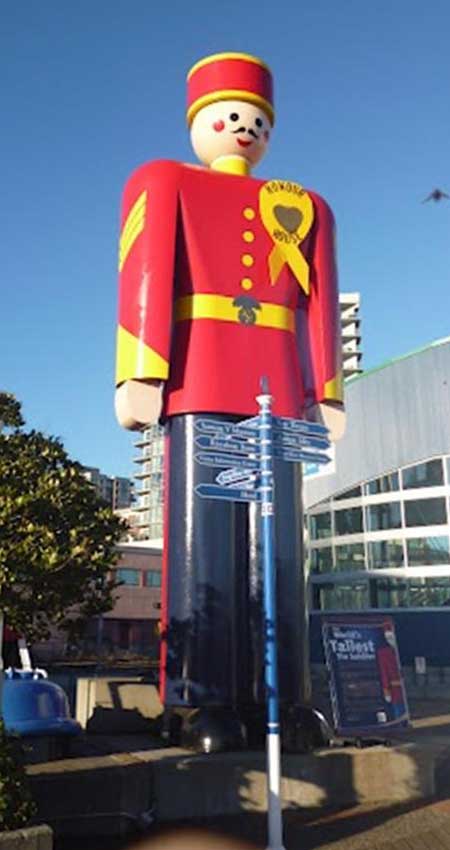 This is a 975-centimeter tall monster in Montgomery, Canada, near Vancouver, and is a permanent memorial to Andersen's famous tin-soldier figure. Since all records can be decided, this is the size, that needs to be overcome.

However, there is no one who solves this challenge. The mastermind believes that he does not have to achieve an above average goal in an average way. That is to say, he does'nt achieve the success alone with investment of an incredible amount of money, but have to create a community, where everyone feels the goals his own, and everyone wants to do for the sake of success. As his company is heavily present on the Hungarian metal market, potential help and support plenty may occur. During an average conversation, he raises the idea to one of his old buyers, János Vas, who makes souvenirs, from metal. He is the first to hear the somewhat "crazy idea" and then, returning home to Dunaújváros, tells the plan to Mr. István Rohonczi (ROHO), to the noted sculptor, to a teacher in Szechenyi High School, who responds as follows: "This is a so crazy idea, which must be implemented!"

They, the three are starting to organize the project legally and administratively, creating a separate company (first called Ólomkatona Ltd, then Miska-Hussar Ltd.), which oversees and realizes the project. Meanwhile, more help is coming, the first supporters appear next to the idea. The question, like at any great initiative, is the usual: "Whereof will it built up?"

The first idea was to look for supporters and offer something to them in exchange. For this purpose, they preparing the Soldier in a reduced version, which gift would receive the sponsor / supporter combined with advertising space and appearance. However, their fundamental aspiration was not to motivate the participants with the money and the profit, but the strength of the community, the hit in the project, confidence and volunteering, as it was stated at the beginning of the beginning.

To get the giant soldier ready, plans, drawings, basics are needed. Since Andersen's soldier is a symbol of the love, and rivalis based on this, thus the famous figure of Hungarians, the brave Hungarian Hussar will be the model of the Hungarian recorder statue. For the time being, only the plaster, but by the end of summer 2006, the first one meter high soldier is ready. This hussar became, on the one hand, a pattern of later replicas, but also a base and template for the upcoming 12,5 meter giant soldier.

In the autumn of 2007 next to the Danube, in the village of Rácalmás, a local construction company, Timpanon P + P Ltd. offered its premises, its building used formerly as a horsemanship, for that purpose to get 12.5 meter high form of Miskahuszár from the PUR foam here, and the necessary work can be done here.

ROHO, therefore, "moved out" to the Horsehouse in the winter of 2007, and despite the cold started to weld the iron frame of skeleton. Even the laid-out pattern was impressive. But, what this means in reality, it turned out only in the spring of the following year when, in March 2008, the sculpture finally "stood up." On March 15, 2008, the village of Rácalmás was given a copy of the statue of one meter as a gift, for a commitment and support in return within a ceremony.

The next important day is the "Baptism Day" in Miska-Hussar's life, which took place on June 28, 2008. At this time, during a local initiative, the Art-Porta Arts Harbor Festival the statue got the Miska-Hussar name. The naming ceremony was attended by hussars, the Scottish piper ask for blessing to the participants, to the success of the initiative, and according to the tradition of baptism, a priest christen the giant hussar, and asked for a blessing for the success of the initiative.